Flores Means Garden In The Sea

Flores is one of the Lesser Sunda Islands. It is located east of Komodo and south of Sulawesi. This island is home to hundreds of different ethnic groups who speak many languages. It seems to be a transition point between the Malay and Papuan races. The west coast of Flores is one of the few places, aside from the island of Komodo itself, where the Komodo dragon is found in the wild.

Flores is known for its mountainous terrain, but it also has good snorkeling and diving locations along the west and north coasts, especially near Komodo National Park and on the northern coast near Maumere and Riung. Scuba diving within the park is excellent.

The Portuguese reached Flores in the 15th Century. Upon arrival, they called the island Flores, which means flowers. They were referring to the gardens of coral and fish in the sea. Beautiful coral reefs bloom off the northern and western coasts, in particular.

In September 2003, anthropologists discovered skeletons on Flores of a previously unknown human species. Homo floresiensis appears to be a miniaturized version of homo erectus, but it only stood about three feet tall. They may have existed until as recently as 11,000 BC or beyond. Nature magazine published the discovery in its October 28, 2004 issue.

There are many languages spoken on the island of Flores, all belonging to the Austronesian family. In the center of the island, in the districts of Ngada and Ende, there is what is variously called the Central Flores Dialect Chain or the Central Flores Linkage. Within this area, slight linguistic differences appear in almost every village. At least six separate languages are used within just a few miles of each other, including Ngada, Nage, Keo, Ende, Lio, and Palu’e.

Flores has several active and dormant volcanoes, including Egon, Ilimuda, Kelimutu, Lereboleng, and Lewotobi. Mount Ebulobo is the most active of them all and Mount Inerie is the tallest at nearly 7,300 feet. Only Java and Sumatra have more active volcanoes than Flores. The mountainous island also has had its share of deadly earthquakes. Flores is just a mile or so east of Komodo, which means Flores has several Komodo dragons of its own on the western side of the island. The male dragons can swim the channel that separates the two islands in pursuit of food.

Bajawa (BAH-jah-WAH): This is one of the best areas in Nusa Tenggara to see indigenous architecture in a variety of local villages. The highlands near here are home to the Ngada people. The elevation keeps it cool here most of the time.

Ende (EHN-deh): This is the quiet capital of the island and departure point for ferries to West Timor. Sukarno was exiled here in 1933 by Indonesia’s Dutch rulers.

Labuanbajo (LAH-boo-AHN-bah-JOH): This is a prime launching point for Komodo. It’s also a very good area for diving and snorkeling. A small airport also serves Denpasar on a daily basis. The small town can easily be traversed on foot. Motorcycle taxis are also an option.

Maumere (MAH-oo-MEHR-reh): This town is built like a Spanish village, with a main square and a market in the center of town. known as the diving and snorkeling center. It’s also the easiest place to fly in and out of Flores.

Moni (MOH-nee): Moni is a small settlement at the foot of Mount Kelimutu. It is a good base for a trip to see the colored lakes of the volcano. The settlement itself is surrounded by spectacular scenery, landscapes dotted with palms and banana trees. Moni can be reached by minibus from Labuanbajo. It is a cramped trip, but the scenery is worth it. It is also possible to hire a jeep and guide to take you across the island. This is quite expensive but would save a considerable amount of time.

Pulau Seraya (POO-lah-OO SEHR-rye-AH): This is an idyllic resort island with great snorkeling and diving. It’s just off the northwest coast of Flores, near the town of Labuhanbajo. Get away from civilization and do some snorkeling and diving. Seraya is little more than a small, arid island outside of the Komodo National Park with a few bamboo huts for tourist lodging, a restaurant, and some villagers who let their goats graze on vegetation. The island’s cove is protected from the sea providing calm and clear water for snorkeling. At low tide the coral is exposed and local fishermen walk on the reef in search of prey. Rowboats can be rented and taken to nearby islands for snorkeling and diving. Make sure to run up to the top of the hill behind the resorts and check out the sunset. The lodges on the island do have showers, but running water is only available a few hours a day. The resort on Seraya is operated by Gardena hotel in Labuanbajo and a stay on the island can be booked at Gardena’s front desk.

Riung (REE-oong): This small town on Flores’ north coast is best known as a diving and snorkeling center. At dusk, the sky fills with flying foxes.

Ruteng (ROO-tehng): This little village sits in the hills at a cool elevation of about 3,500 feet above sea level. Enjoy the views of the mountains, valleys, and rice fields all from one tranquil area on the western side of the island.

The most magnificent sites are the colored lakes inside the Kelimutu volcano. Each lake is a different color of blue, green, or black. The colors change over time.

Other attractions include spectacular hand-woven textiles of Maumere, Ende-Lio, Ngada, the traditional megalithic village of Bena and other traditional villages in Ngada regency. 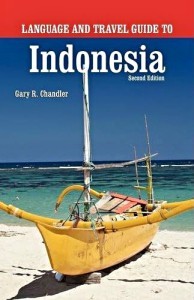 Experience more of Indonesia than the average traveler by speaking the local language. Simple courtesies and greetings will make your trip more productive and rewarding. Our phonetic style makes it impossible to mispronounce important words. Order your hard copy.

The locals will sparkle with delight when you speak just a few words in bahasa Indonesia.